August 16, 2019
Oooooo!!! I'm so proud of my friend Karilyn Bentley and excited for this upcoming release. They're going to make it into a MOVIE! SQUEEEEE!! 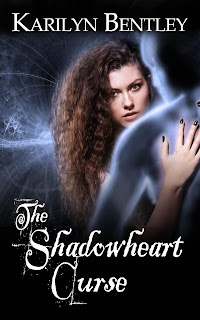 Escaping New York after a client’s untimely death, medium Adrianna Sinclair flees to her family property in Italy. All she wants is to avoid ghosts, but an attractive one tempts her in ways she never knew possible.  Luca Fausto has been trapped on the Romani property for over a century for a crime he didn’t commit.  Adrianna may be the answer to breaking the curse that keeps him bound.  Standing in their way is a demonic spirit's plan for revenge.  Will they prevail or will Luca be cursed to the shadows forever?

Flickering lights woke Adrianna from a deep sleep. Her heart pounded like a drumline, quick staccato beats sending a jolt of adrenaline racing along tensed nerves. She froze, lying on her side, listening as a soft vibration shook her bones. What was happening? Low voices punctuated with laughter circled around the room. Thin whispers of music drifted in through the windows. What the hell? Was she dreaming? Or were trespassing thrill seekers exploring the ruins in the middle of the night? If that was the case, she needed to kick ass and take names. She rubbed her head. Right. She should dial 113 and let the Polizia Municipale handle it.
She reached for her phone, then put it back on the nightstand as the melody turned into the stringed notes of Beethoven. Beethoven? The music sounded like a chamber orchestra. Since when did trespassers out for a thrill bring along violins and cellos? Was someone pranking her?
She rolled out of bed and strode to the window, yanking on her thin summer robe as she walked. Maybe she should close the shutters and pretend an orchestra hadn’t taken up residence in the ruins. Glimmering lights drew her attention to the opposite wing of the mill where a man stood staring at her window. At her. Breath caught in her lungs as she froze.
But only for a brief moment until she realized it wasn’t a man, at least not a living one. Her breath escaped on a whoosh of relief. Intuition whispered the man was the spirit who’d watched her last night.
The one from her dream.
Shadows clung to his body, ghostly fingers releasing as he stepped into the dim slash of moonlight. Lights flickered from behind him, like the dying gasps of sputtering candles. Dressed in a white shirt with an old-fashioned high collar, sleeves rolled halfway up his forearms, and dark trousers, he reminded her of a working man in a World War I photograph. As if he had removed his coat and tie and rolled up his sleeves to get to work.
Except the men in those photos didn’t sport the wide-eyed, happy look of this man. Ghost. Whatever. Yeah, he wasn’t the only one surprised. She’d sworn to never see a ghost again, yet there stood a ghost, captured by her gaze. The man was hot, in an old-fashioned way. At least he didn’t sport a handle-bar moustache.
He gestured to her, his hand beckoning in a “come here” motion.
She squeezed the bridge of her nose. Was she actually thinking of heading his way? Judging by the way her feet pointed toward the door, she’d already decided. Dammit. She might not want to see a ghost or speak to a spirit, but past experience told her if she ignored them, they ramped up the annoying factor.
How bad could it be to talk to an attractive spirit?
Decision made, she tightened the belt of her robe, stuck her feet in her flip-flops, and headed out the door. The soft flip-flop-flip of her shoes on the grass was lost in the strings of Beethoven drifting from the tunnels.
The man watched her approach. He gave a little nod as she stopped in front of him, his half smile mirroring hers.
Up close, he exuded an aura she’d never felt from a ghost. He felt alive to her internal senses.
Which was ridiculous. Clearly, he was not alive. She saw brown stones through his body. Not a typical characteristic of the living.
She wiped her palms on the sides of her robe. “Hello. I’m Adrianna Sinclair. Who are you?”
His grin grew. “I am Luca Fausto. It is nice to meet you.”

Karilyn Bentley's love of reading stories and preference for sitting in front of a computer at home instead of in a cube, drove her to pen her own works, blending fantasy and romance mixed with a touch of funny.

Her paranormal romance novella, Werewolves in London, placed in the Got Wolf contest and started her writing career as an author of sexy heroes and lush fantasy worlds.

Karilyn lives in Colorado with her own hunky hero, two crazy dogs, aka The Kraken and Sir Barks-A-Lot, and a handful of colorful saltwater fish.